Is the couple officially back together? Following the premiere of Don’t Worry Darling, photos of Harry Styles and Olivia Wilde were released. After Harry’s residency at Madison Square Garden, the couple was spotted out on a date in New York City.

It was a night out on the town for the star and director of Don’t Worry Darling. Harry recently completed his 15-show residency at Madison Square Garden on September 21, 2022. Olivia attended the Garden to support her boyfriend as he was honored with a banner commemorating his historic run. As the premiere of Don’t Worry Darling approached, the couple kept their distance from one another. During the premiere of the film at the Venice Film Festival, they were not photographed together. As for Harry, he appeared to be making headlines by allegedly spitting on Chris Pine, which was later confirmed to be untrue. During the controversy surrounding the release of the film, many fans speculated that the couple had broken up. The newly emerged photos from DailyMail (see the photos here) appear to indicate that the couple has not separated. They were seen smooching in the middle of the street. 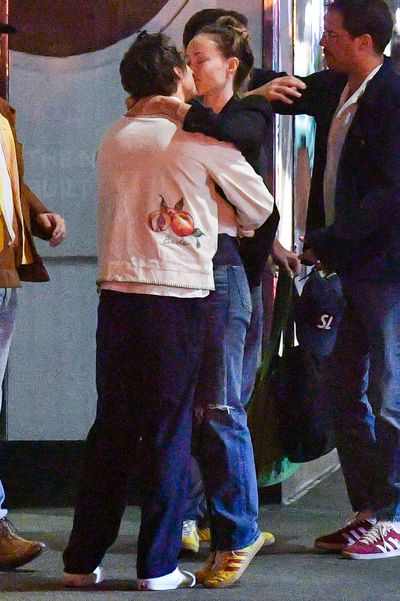 Olivia, Harry, and Florence Pugh seem to be responsible for the drama surrounding the film. A source told Page Six that Florence and Olivia had a rift due to the director’s affair with Harry. “I can tell you for a fact that Flo seeing Olivia and Harry all over each other on set did not go down well as Olivia was still with Jason Sudeikis when she first hooked up with Harry,” the source said. Another inside revealed that Olivia’s ex-fiancé “Jason and the kids visited Olivia on set at the beginning a few times, so I think this all made people feel a little uncomfortable.”

She has not participated in any press related to the psychological thriller film since then. According to TheWrap, she had commitments to Denis Villeneuve’s Dune Part Two, which is currently being shot in Budapest. “[Florence will] be doing greetings for us from the set of Dune because she’s not doing press,” a studio executive said. As Florence was busy filming Dune, she was also unable to attend the Don’t Worry Darling film event in New York City. Nevertheless, she posted her positive experiences with the film on her Instagram account shortly after its release on September 23, 2022.

After Carl Woods dumps Katie Price, she spills out of a tiny, plunging top